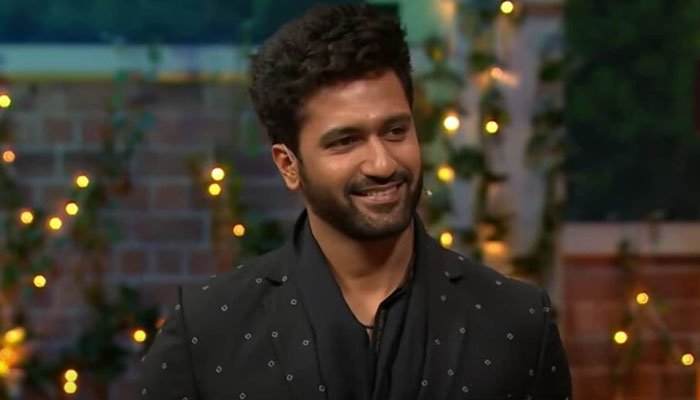 Being newlyweds, Vicky and Katrina gave an amazing visual treat to their fans by posting an extremely adorable picture on Christmas. He looked classy, caring husband, and Katrina looked blissfully happy in his arms. Since then the awestruck fans have been posting emojis and cute comments on their picture. This came after their wedding pics, posted a week earlier.

They have beautifully coordinated the pastel outfits in these photos. Katrina looks pleasant yet graceful in a light multicolour dress. You can see the couple hugging each other in this picture and the joy is clearly visible on their faces. The gorgeous Christmas tree in the background smoothly blends with their attires. This proves that the couple celebrated their first Christmas at home with great fanfare.

Zoya Akhtar, Angad Bedi, Bear Grylls, Neha Dhupia, and Arjun Kapoor dropped beautiful comments on the photo. On the other hand, the Kapoor family celebrated Christmas with a big fanfare as ever. Kareena Kapoor has again shown her presence after beating Corona. She arrived at Kareena along with Saif Ali Khan and Taimur to make most of it.

Looking at the picture one cannot help thinking about the eventful journey of Vicky Kaushal. Everyone knew Katrina Kaif before, moreover, she was already an established star by the time Vicky had started his career however Vicky was trying hard for stability and fame.

Let’s start from the beginning of his Bollywood career. We will also share a few facts about his struggle days.

Who was Vicky Kaushal and how did he enter the Film industry?

Vicky has a Bollywood connection, being the son of Mr. Shyam Kaushal who is considered to be one of the biggest stunt choreographers in the Indian film industry. Though he knew the dynamics of the industry since childhood still he has gone through his share of struggles and experiments to get into it and mark his place.

During one of his interviews with a famous website, Vicky admitted how his life had taken a 360-degree turn from studying engineering at one time to becoming an actor. He had this gut feeling that a 9-5 job wasn’t his cup of tea.

That is when I decided that I did not want that. That is when I asked myself what I wanted from life. That is an important question we need to ask ourselves. I am glad it happened that early in my life.” Eventually, he started assisting film directors.

Also Check: Everything You Want to Know About Harnaaz Sandhu’s Miss Universe Journey

Working as an assistant director in many famous films, he ended up signing his debut independent drama  ‘Masaan’ and that was his first step in the world of acting. Talking about it, Vicky shared “It’s like a dream. Sometimes I feel that God has been very kind to me. When I came into all this, I knew that the producers and directors would not be waiting for me. My journey began in 2009 when I completed my graduation. I jumped into acting after that. I did an acting course in Mumbai. I then became an assistant director at Gangs of Wasseypur. I was also doing theatre.”

Vicky further added, ‘I started giving auditions for Ad films, short films, small or big work. In the meantime, I realized that man, it’s too far away. I remember while I was having lunch one day having my mother sitting beside me. It was a bad day, I was disappointed. I told my mother that I don’t know how all this would happen. Then my mother said that it is not your responsibility to make it happen or not. All you have to do is to keep the faith alive that it is going to happen.” There was no looking back then. Finally, Kaushal achieved his breakthrough in 2018 when he appeared as the male lead of the romantic comedy Love per Square Foot, India’s first Netflix original film.

He came to the limelight with Meghna Gulzar’s spy thriller Raazi (2018), based on Harinder Sikka’s novel Calling Sehmat. The movie was set in the times of the Indo-Pakistani War of 1971, depicts the real-life story of a young Indian girl from Kashmir (played by Alia Bhatt) who marries a Pakistani army officer (Kaushal) to spy for Indian intelligence. He loved the script as soon as he heard and was drawn towards the humanity he found in the story and delivered a power-packed performance in the film. People loved him as vulnerable as well as authoritative at the same time in his character. The movie turned out to be one of the highest-grossing Hindi films featuring a female protagonist.

Vicky was shining like a new superstar in the Bollywood industry.

Vicky rose to the fame with movie “Uri: The Surgical Strike” which made him a nation’s heartthrob. His other milestones are “Sardar Udham Singh” released on Amazon Prime on 16th Oct. 2021. He will soon be seen in the film Ashwathama however there were rumors of this mega project being shelved down in the news media.  Kaushal fans are desperately waiting for his new Bollywood film’s release. They enjoyed watching him recently with Bear Grylls on his Discovery+ original show Into the Wild.

The best advice he has ever received is actually from his father, “Give a hundred percent to your present, and your future will be better than what you want it to be”. Leave the rest to God. That is the best way to deal with life. He followed this advice until today and paved the way to stardom. His films have so far generated over US$150 million!

Kaushal contributed ?1 crore to the PM CARES Fund and Maharashtra Chief Minister’s Relief Fund due to the COVID-19 pandemic in India.

What made him different than other co-actors?

His utter honesty, approach towards life, and great sense of professionalism make him stand out in the crowd. Why he has achieved success and fame in such a short time is his core values as an artist, moreover, his mother keeps him grounded all the time. He never let success go over his head and remain humbled no matter whatever milestones he has touched. Hard work, commitment, and simplicity define him as an actor. He never fakes it when he interacts with the world. Comes out as a very down-to-earth person.

His SOUL is pure and SPIRIT is