Walking On The Edge: Double Decker Root Bridge near Shillong

For those who have not read my previousÂ post’Â Live root bridge at Sohra’, sharing little bit about Live Root Bridges: Meghalaya’s double-decker and single-decker root bridges are unique in the world and are a sight to behold. The bridges are tangles of massive thick roots, which have been intermingled to form a bridge that can hold several people at a time.

Now few words about this one: Located at the bottom of the valley near Nongriat village the 20 meter (65 foot) double decker bridge is grown on a voluminous stream. It takes around 6 to 8 hours to complete the 9 km. journey ( 3.5 km one way) depending how many breaks one takes in between, the time spend at various scenic locations fall enroute Â and most important what is the fitness state of an individual. How? Fitness is an important issue when one has to walk more than 3500 stairs downhill. (the real challenge was to climb up those steep stairs on our way back phew !!!),Â

We walked ON THE EDGE. Crossed streams, balanced on metal bridges to join one rock boulder to another, walked on single root bridges in the lap of the luscious jungle. Starting point was Tyrna village.The trek can be roughly divided into 4 parts. For the first two parts we just went downhill descend the steps, very down……..(Descent: 2,400 feet ) 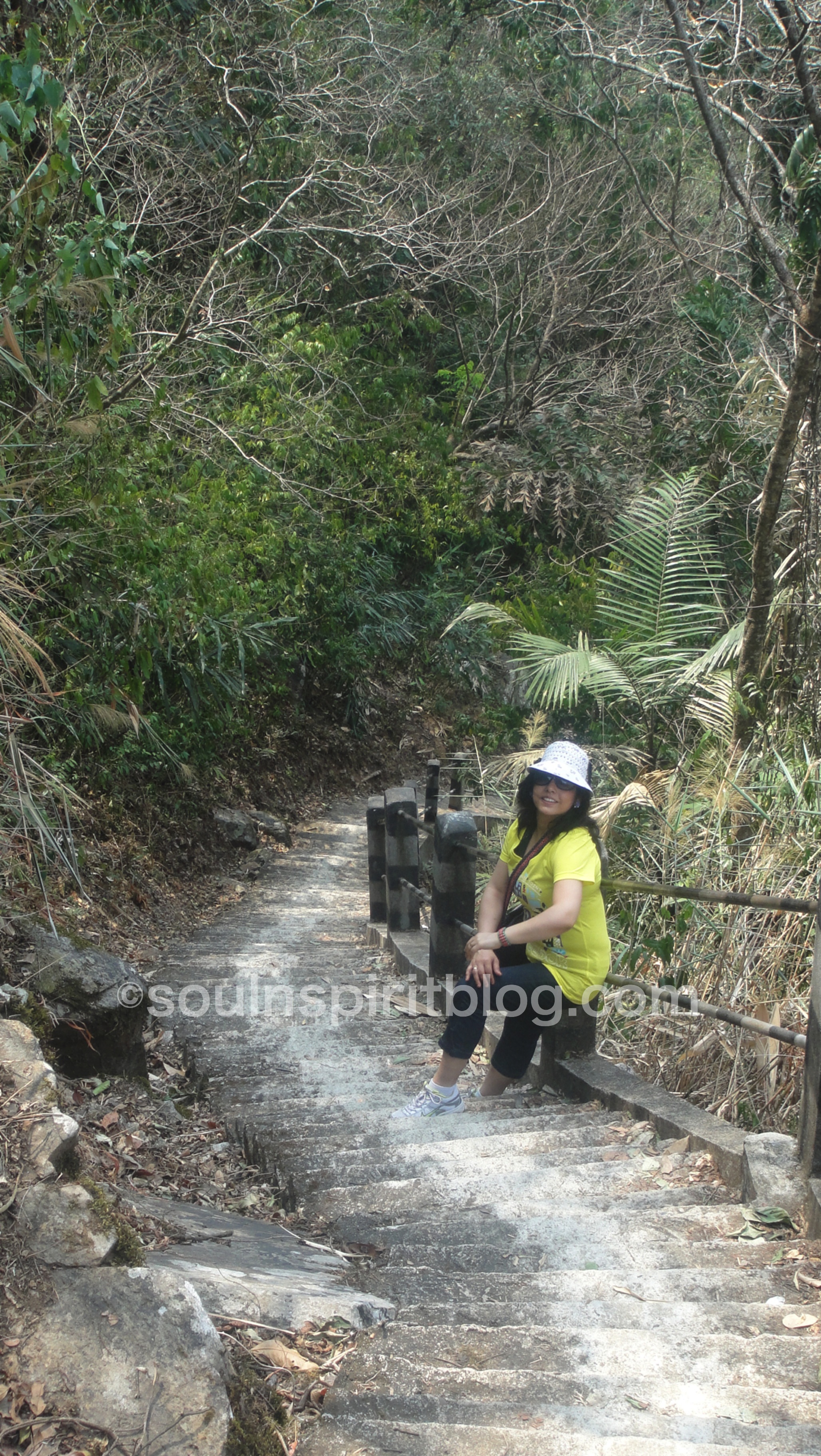 Can you see the long trail of stairs till infinity in the pic below? The trail begins to descend, and soon comes to a T intersection with a steep stairway. Going uphill, the stairs were almost agonizing 2000 foot deathmarch.

I had no idea that we had to follow the same route to go back. I thought there would be a road to the parking area from the other end of the village which would merge in Cherrapunjee highway . My husband knew it before and kept it to himself as usual and told us once we reached there. 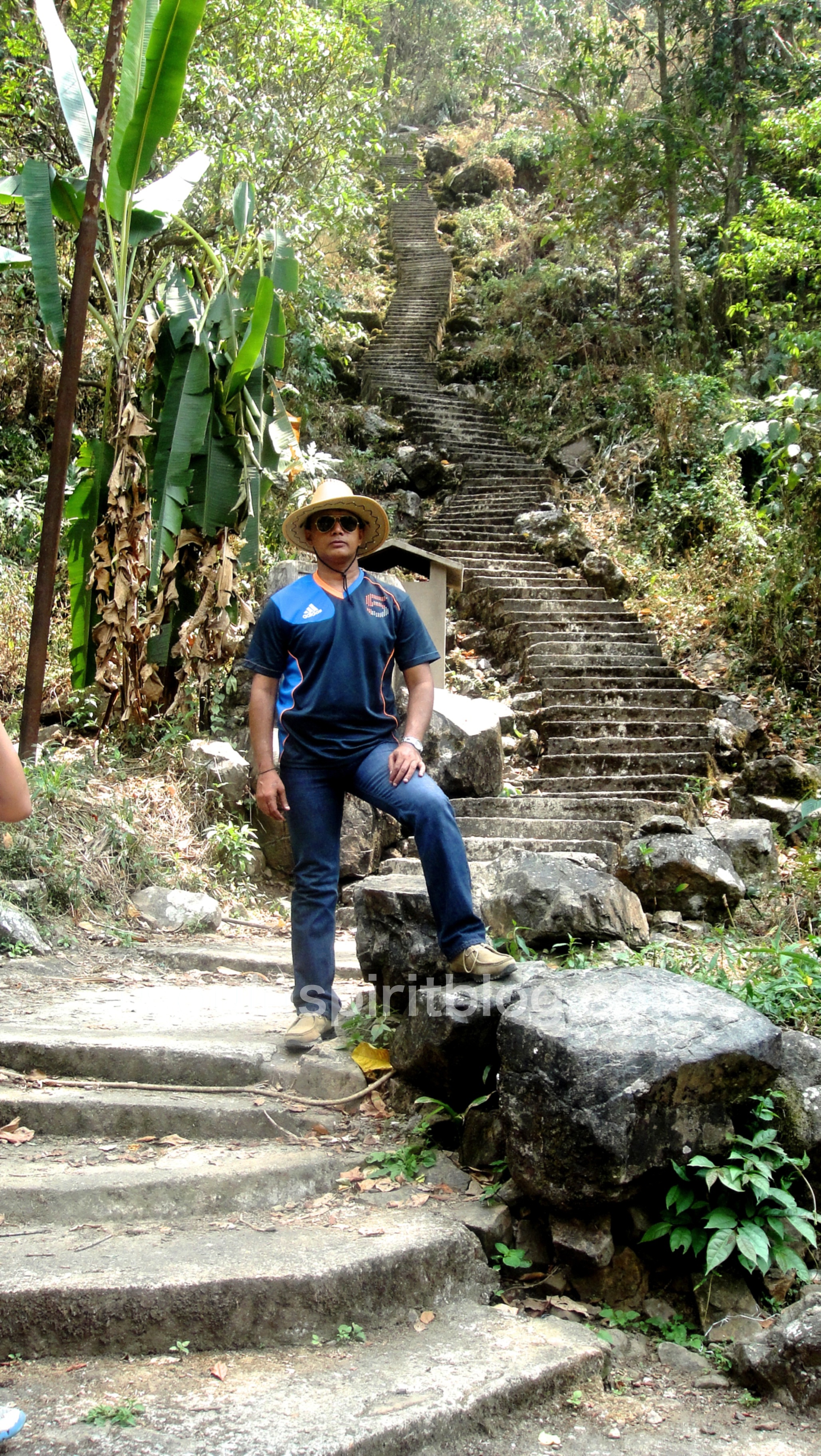 A kind of moderate trek for physically fit people, we walked for almost 2 hours to reach, spend one hour on the bridge and another two and a half to climb up. it was an unexplored land, tribal villages enroute, what else we could have asked for…….. a perfect adventurous day and seven hours of non stop thrill and adrenaline rush…… 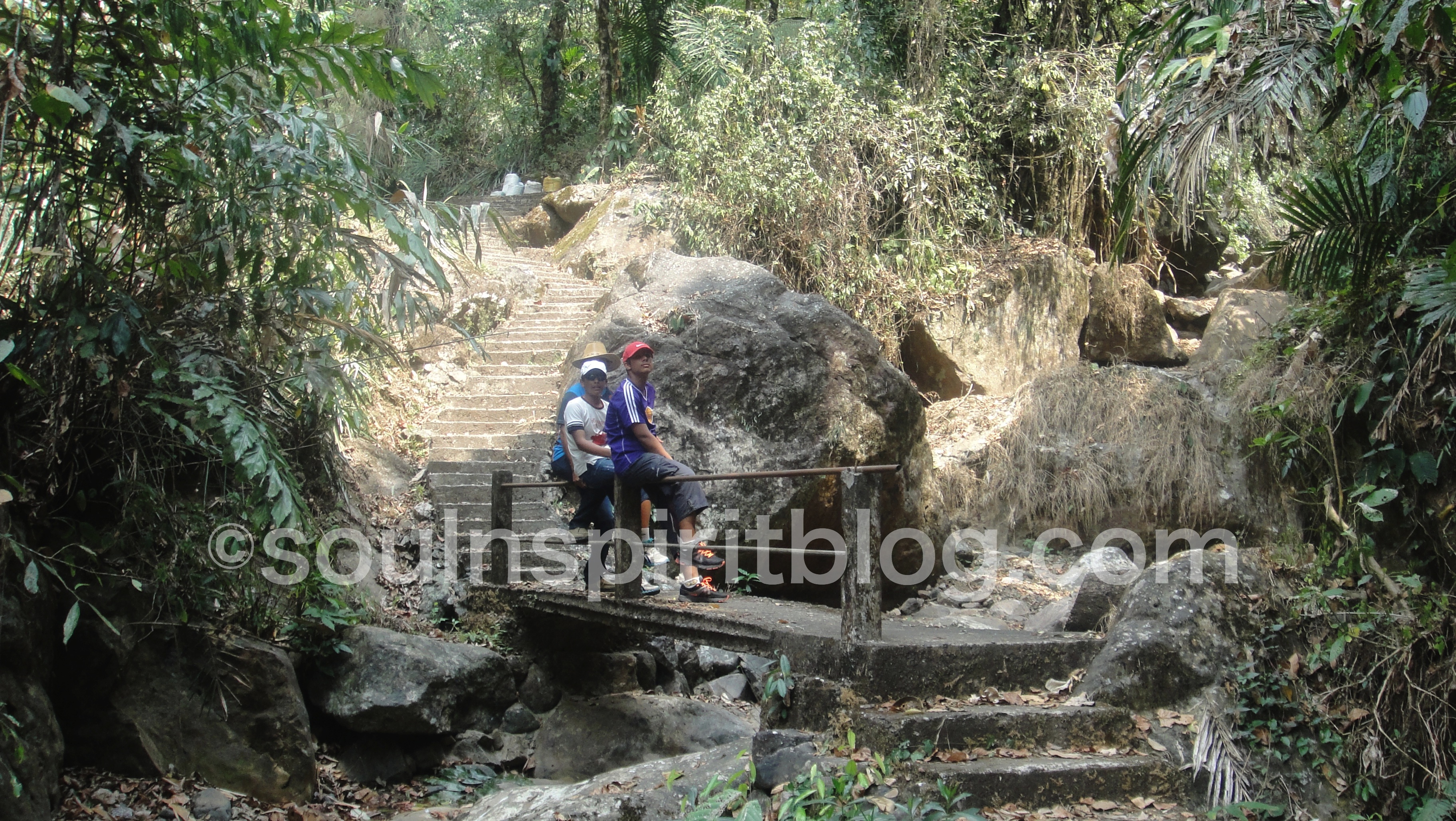 Â We reached half way, in front of us was a village which was so peaceful and out of the world. We halted there for good twenty minutes, recharged ourselves sipping hot red tea at the only tea stall available here. Voila ! Ready for the journey ahead. Now we had to walk on the flat path Â for next one hour or so to cross two villages. This would be the end of second part of our trekking.

The rich flora and fauna was very pleasing to eyes. Forest was green and thick. Wild orchids took our breath away. The bay leaves were looking golden and spreading the sweet aroma in the entire forest. I collected dry bay leaves which were in abundance there. They smelled heaven.

There were two suspension bridges to cross before you get to be there to see the root bridge in its full glory. We walked slowly on it as it was swaying but not too much. Totally cut off from the world, focused and cautious we crossed two metal bridges successfully.Â 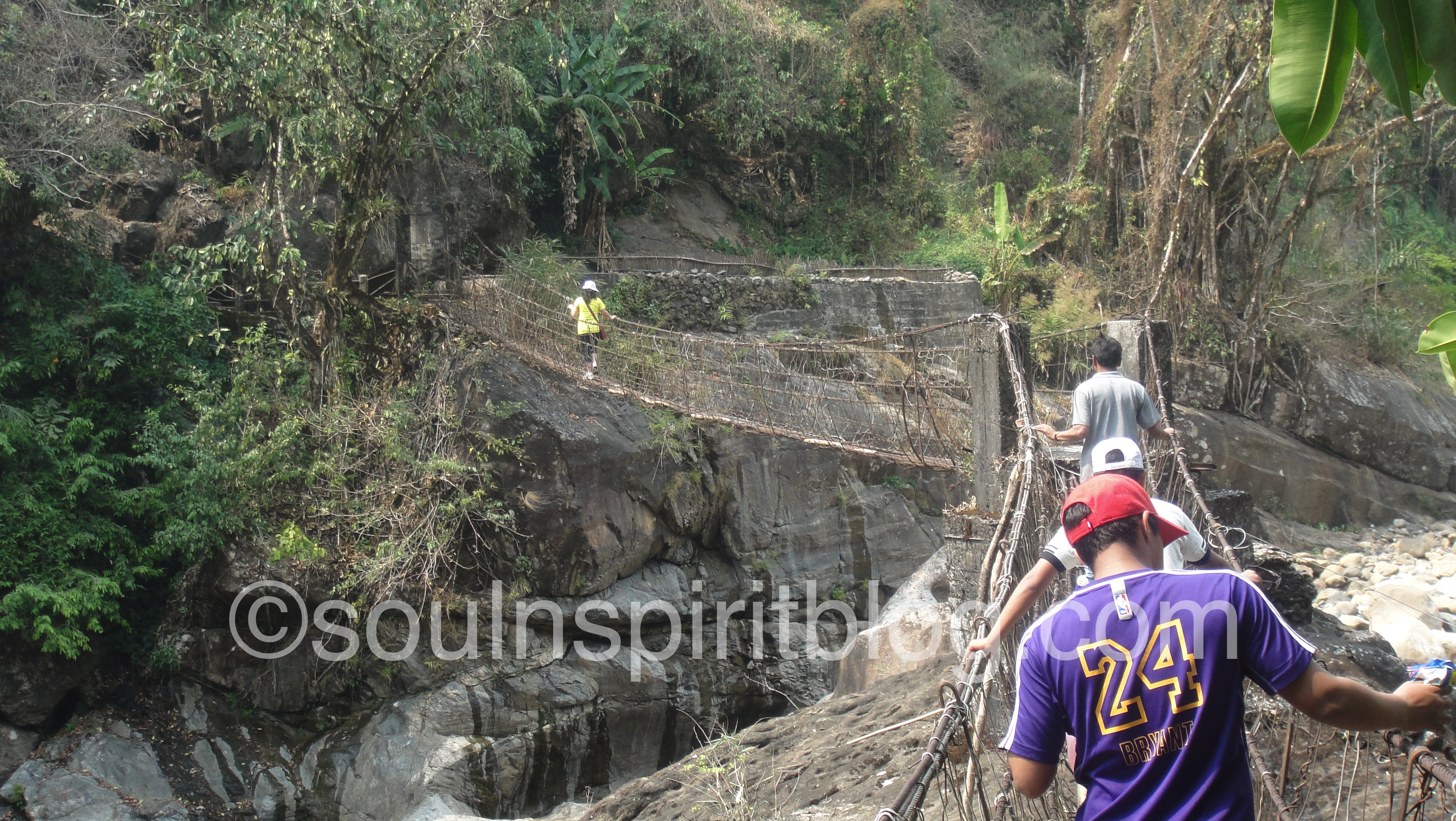 They were pretty shaky and we had to cross it one person at a time, while being surrounded by raging waters â€¦ frightening in a way but amazingly adventurous at the same time.Â We were done with the third part of the trekking. 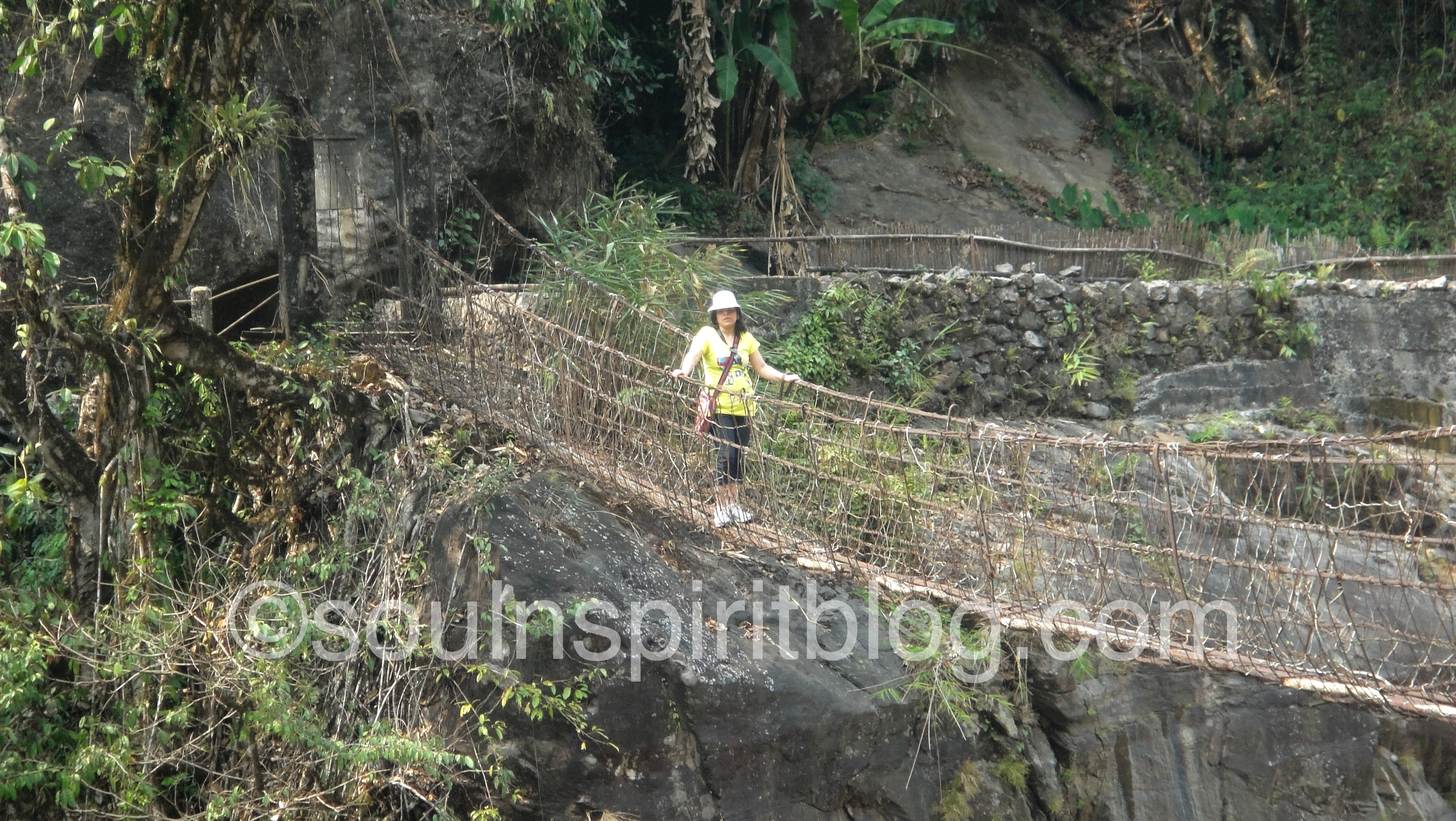 For the final part we had to climb around 1000 stairs to reach the ‘holy grail of all root bridges” located at Umishiang river.Â 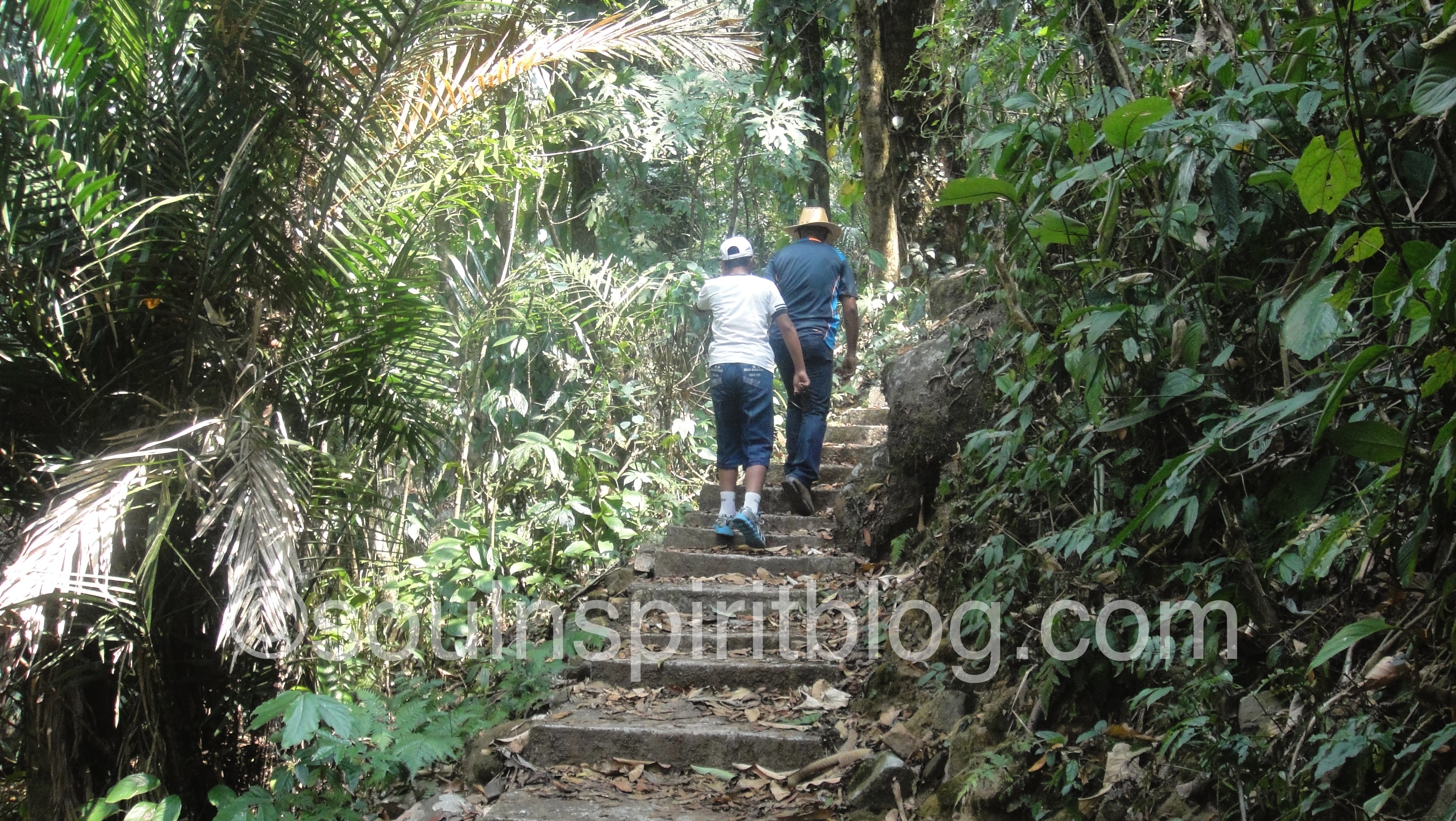 To enjoy this beautiful sight we crossed over 3500 steps across hills, and rickety rope pathways Â It’s all worth it! Khasi people have been trained to grow these bridges across the raised banks of streams to form root bridges made from the roots of the Ficus elastica tree, which produces a series of secondary roots that are perched atop huge boulders along the streams or the riverbanks. 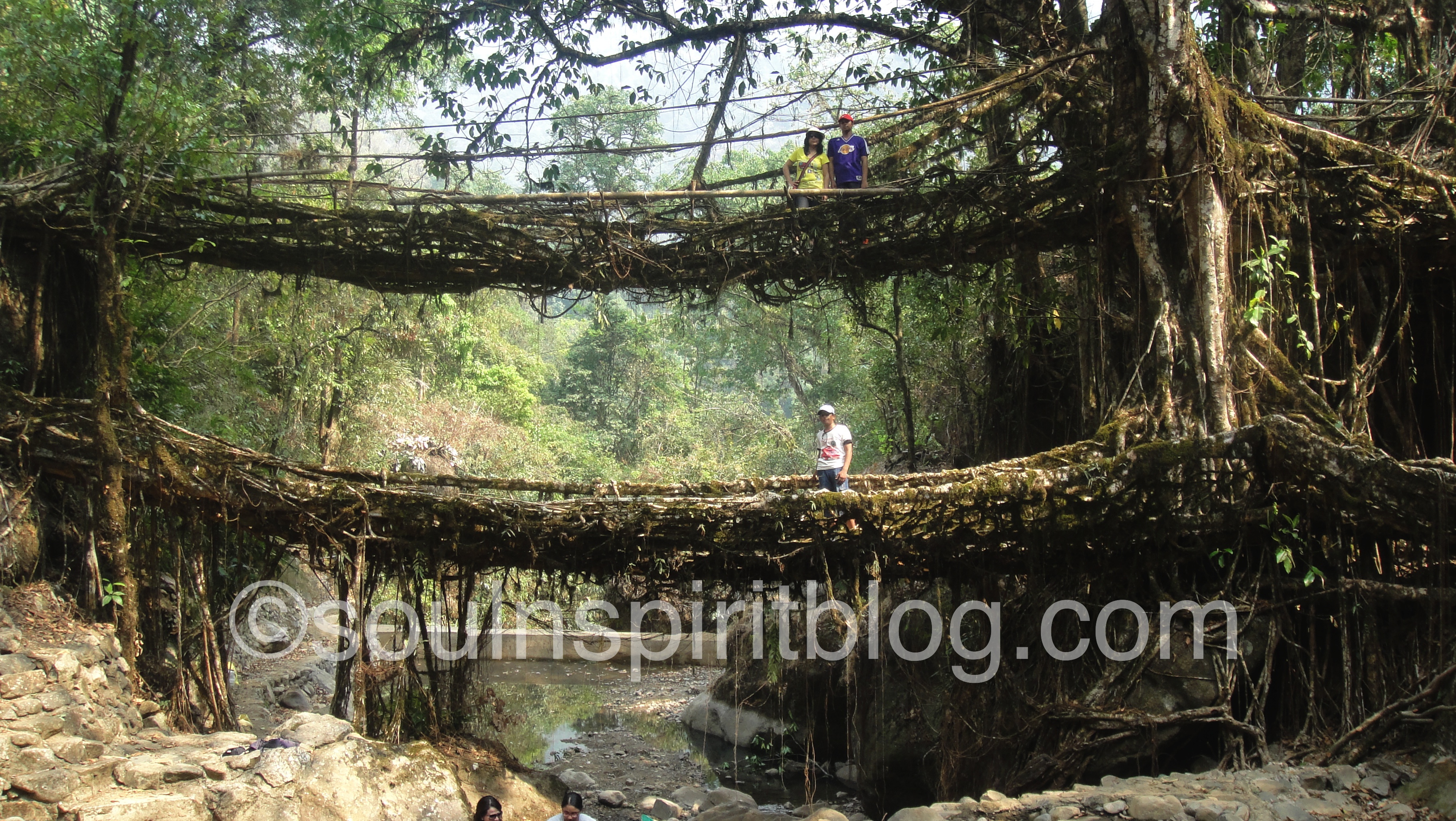 The life span of these bridges are around 500 to 600 years after they are well formed ( take ten to fifteen years to be fully functional) and are strong enough to take load of the daily functioning and commuting of locals out here. Some of which are Â over a hundred feet long, more long lasting than metal or wooden ones which gets destroyed due to massive rains this area receives.

They are live, gain strength each day, marvel of nature, bless the tribals, live in perfect harmony and pride of Meghalaya. The villagers are thrilled to see more and more national as well as international tourists pouring in to capture the beauty of these incredible piece of art. This place is certainly not for faint hearted, requires courage and determination to visit this lonely planet. It is imperative to keep the climatic conditions in mind. For nature lovers, sky is the limit !!!

It was a long way back, I gave up in between, glued to the stairs, not ready to budge, gasping for breath !) Then I watched my kiddos climbing effortlessly, matching steps, I was filled with josh. “I am not tired at all….com on I can do it” I boosted myself and got up to complete the climb in one go. 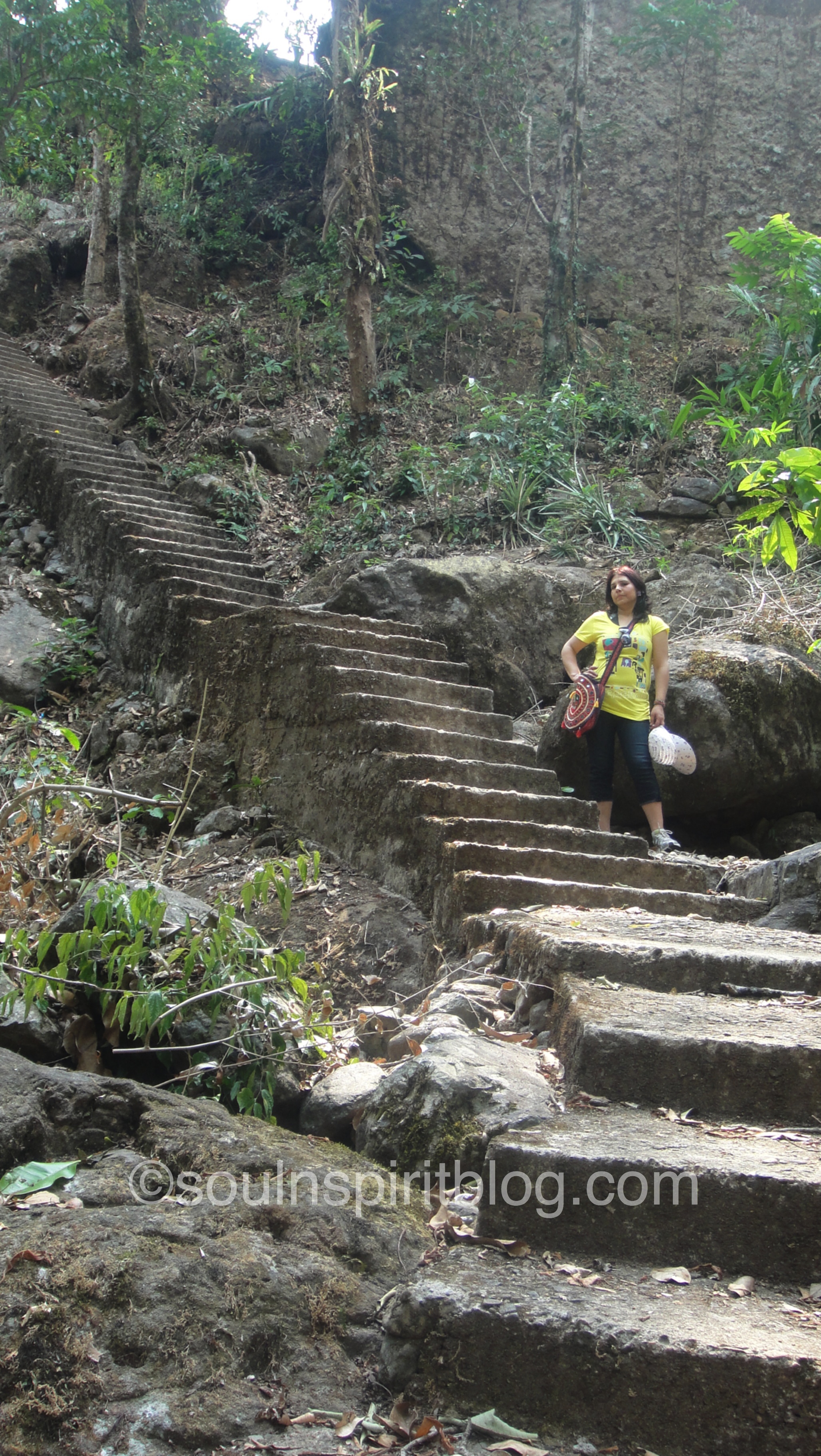 It would Â not have been possible to finish the trek in record time without the encouragement and support of my sons. I was amazed to see their stamina, storehouse of energy they were !!! My dear husband was as fresh as morning dew, no sign of fatigue or breathlessness, thanks to the physical training, huh. He literally dragged me at places when I refused to move ahead. You can walk for miles but how long can you climb the killing stairway? Â 3000 steep stairs, Boy !Â 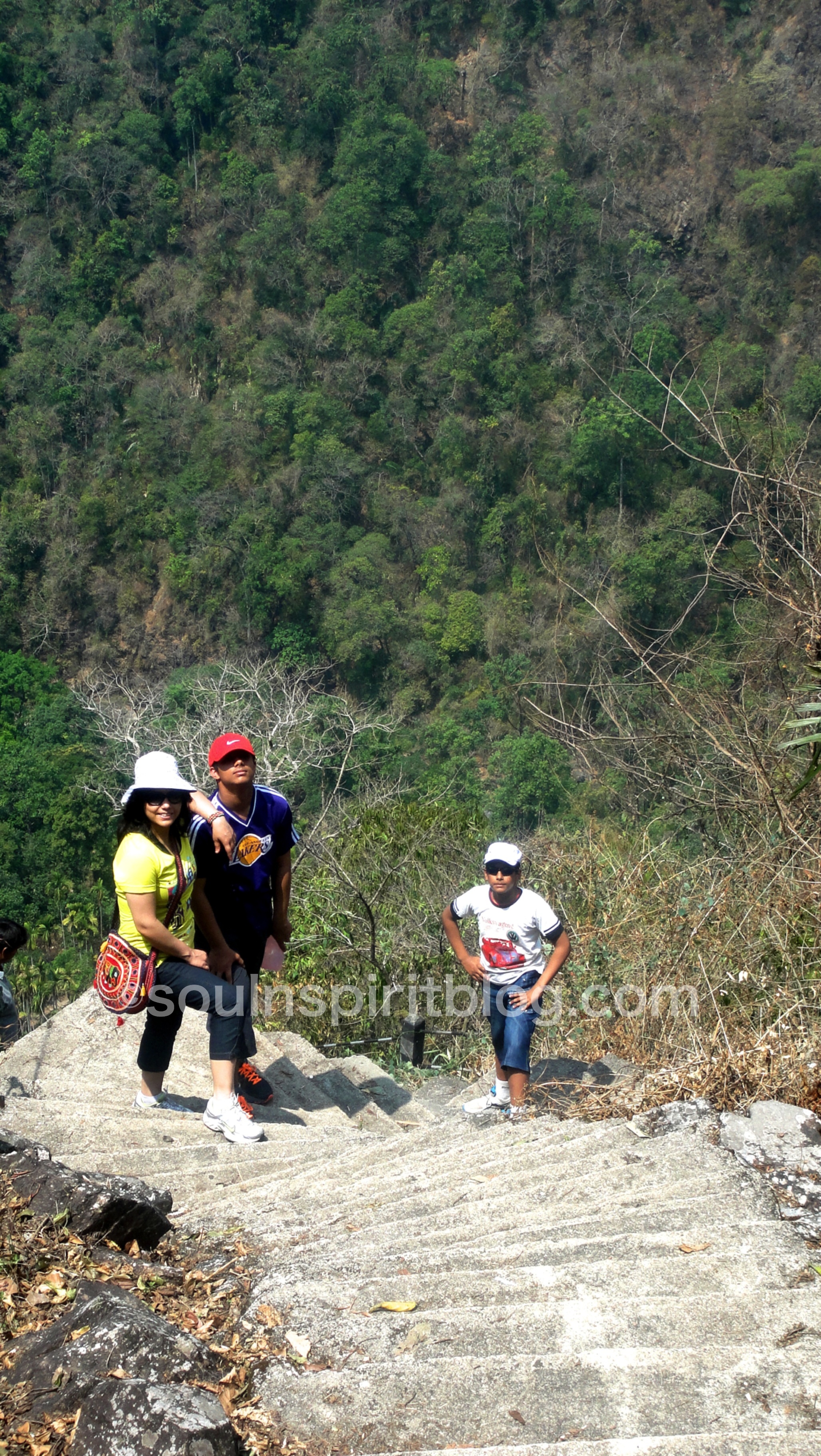 Hurray ! We were almost there ! My husband was more than relaxed to see me exclaiming, waving hands with joy, Â my sons greeted me from where we’ve started walking down towards valley in the morning. We spent a memorable day in the company of nature, tribals, root bridges, streams and Australian tourists who had come that day to visit the bridges………IT WAS WORTH IT. 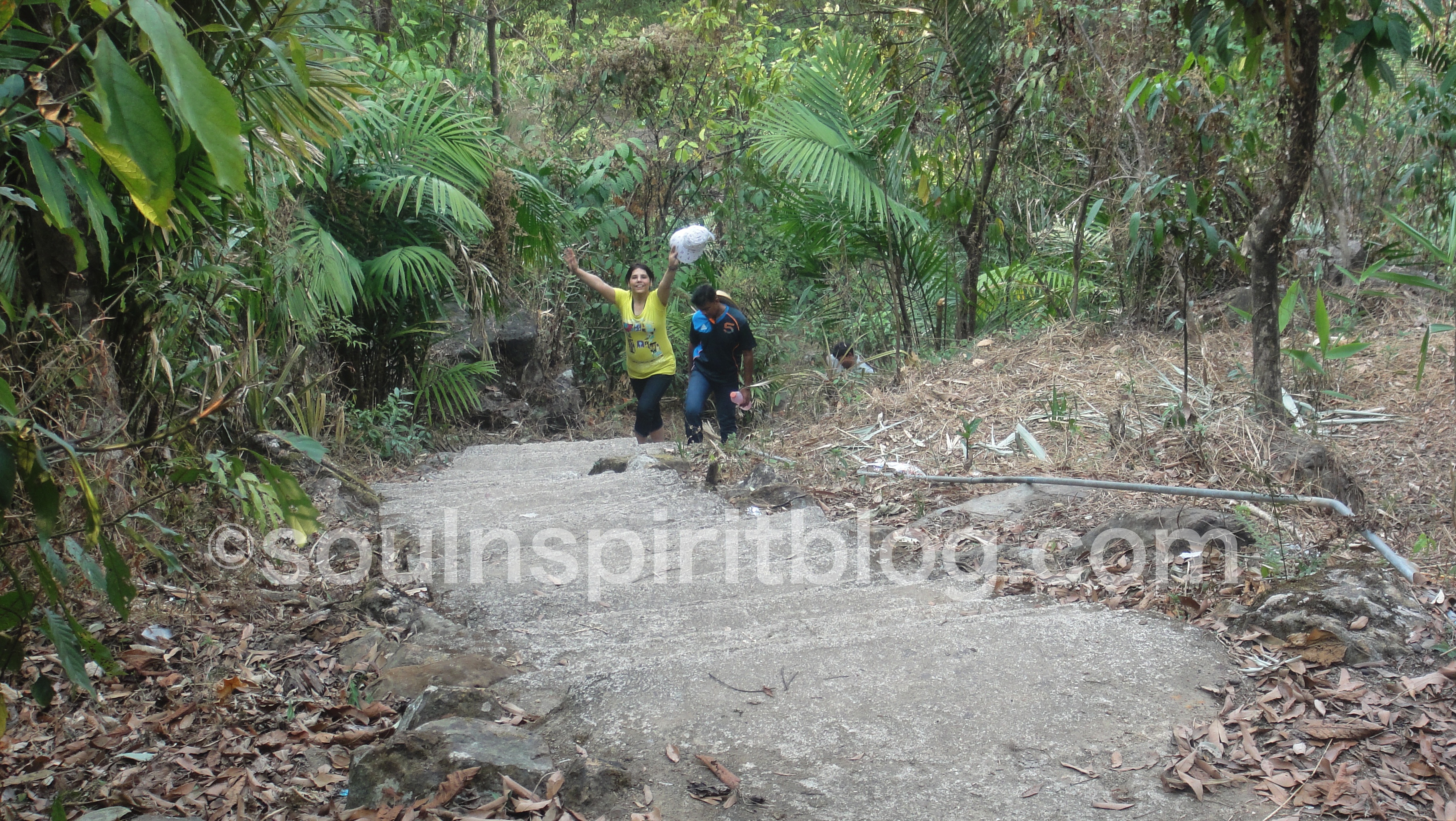 Hope you enjoyed the trip with me. See you again with the photos on the longest live root bridge in the world.

PrevPreviousUncle Bob by Default, It’s Me
NextCooking up StoriesNext
On Key