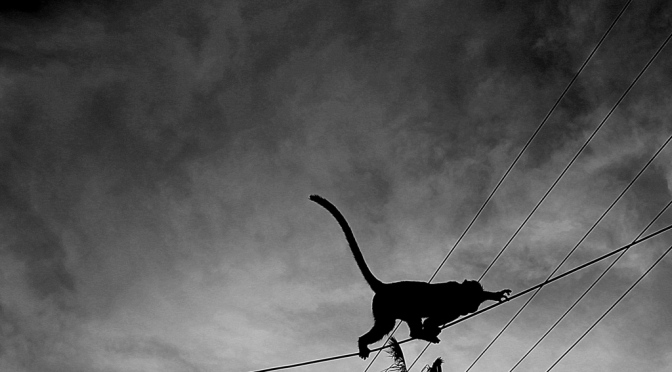 This is partÂ 9 of flash fiction chain #5 hosted by Pho Trablogger and inspired by the amazing picture above. This is a collaboration of bunch of writers/bloggers all over the world who create a fictional world with their imagination based on the picture given by hostÂ Jathin, Proud to be part of this team. Please visit his blog for previous four series.

To get the context of the story, please read the first eight parts

Jenna headed for the jungle leaving Mrs. Montogomery unattended who was still trying to speak something but felt a lump in her throat. Jane was almost running on the muddy track. She could clearly listen her heart beats while she was huffing and puffing to catch her breath. SheÂ was breathing from her mouth which went dry. Unable to walk moreÂ her sweating bodyÂ bent on a nearby tree’s trunk to halt for sometime. She closed her eyes, tried to close her mouth. She opened her eyes toÂ look around. The Forest was actually a crooked Â grove of oddly shaped pine trees grown with a 90 degree bend at the base of their trunks. All of the trees were bent northward and surrounded by a larger forest of straight-growing pine trees. The crooked trees trunks were covered with ginger-brown climbers entangled in branches. As the rush of fresh air filled her lungs, she moved ahead to find the children.

Mesa and Toro were trying to follow Rick who like a hypnotized fellow was walking towards theÂ thickest patch of the forest. Suddenly they reached near theÂ Lorestone which was hidden in a temple deep within a jungle-swamp known as the Danarg. Over the years, this fetid swamp has become the home for any number of evil creatures who seek to protect the jungle and its treasures.They felt as if someone was following them, they turned to findÂ themselves pressed hard on their rightÂ shoulders, bothÂ fell down with a big thud.Â

Rick was horrified to feel the silence of the place, he could sense negativity in the environment, he shivered and called monkey,”Sun, Where are you? Why you don’t tell me the truth about your identity? Why this place have aÂ eerie feeling?”

Sun came in front of himÂ swinging from the branches of pine tree and sat on a rock,” Believe me I have not told you lies. After surviving the perils of Castle death I am the only one left in my tribe, I mean ‘a speaking monkey’ and to come back in power I need to have a large army. I tried collecting my strength by harvesting souls for my master so that my tribe could againÂ be revived. My armyÂ will fight against the evil.Â ToÂ make matters worse, the Darklords have united behind a new leader, and may soon again bring war in the jungle.”

Rick was scared now. “What do you want from me?”

“I found you the most mature oneÂ among all those children whom I saw at Mrs. Montgomery’s house. You can actually convince other children to help me in my mission.” Sun replied politely.

“What? Have you gone nuts? Why will I do that for you? This is utter weird ! You have actually bewitched me, mislead me and now you want me to bring my family to you for holy sacrificeÂ so that your tribe increase? So ridiculous ofÂ youÂ to think all this.” Rick shouted in anger.

“Look Mr.Sun I am going back to Ma…..I warn you if you ever come near our house to troubleÂ us ever again, I will take some drastic action” said Rick and turned to move out fromÂ the Danarg.

“Do you thing it is so easy? Neither youÂ nor Mesa and Toro can go out from here. You came here because it was destined. Now three of you have to please my master” jumped Sun from theÂ rock to get hold of Rick.

RickÂ saw in disbelief as Toro and MesaÂ were brought chainedÂ there by someÂ strange looking men….

.To know what happened in the jungle visit Manvi