The Woman Of Big Deeds 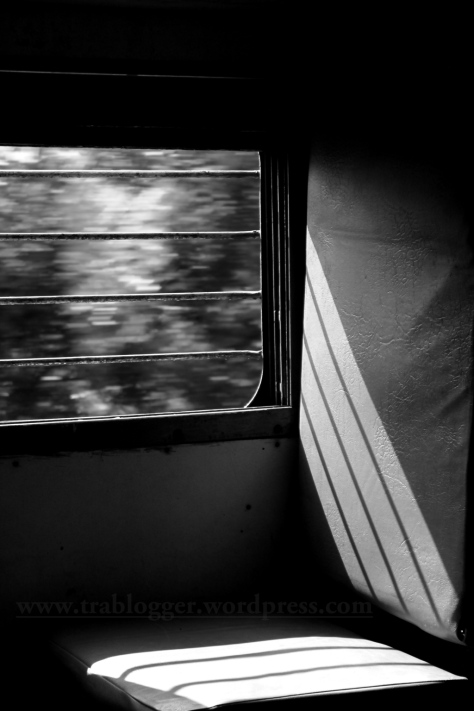 The following work of flash fiction is in collaboration with my fellow blogger Jithin of Pho Trablogger . The picture of the train seat that you see above is his creative photography which inspired Â my friend Â and another fellow blogger Sweety ofÂ https://sweetykannoth.wordpress.comÂ to write a short story ‘ A seat by the window’ related to this image. I read it and liked it so much that I decided to continue with the creative chain of Flash-Fiction Story. Here is my contribution and I am starting from where Sweety’s story ends.

The night was dark, the train kept on running on the tracks halting shortly on the stations fell enroute. Many passengers boarded in while few of them got down and lost in the mist. Lolita was still numb, shattered, unable to climb up the upper birth for a nap at night. She kept on looking outside, her gaze fixed on the window, totally cut off from the actions of the passengers present in the wheeled wagon.

“Where I went wrong? What was my fault, I loved blindly or I trusted blindly? Where will I go? What will I do?” she introspected as if she would get answers to all her questions, tears rolled down, she shivered, got up and swiftly pulled the chain. People were shocked at her sudden reaction to her silence which was noticed by one and all. She promptly packed her bags, wore her scarf Â lying on the seat, held her purse and left the bogie. As soon as the train started crawling with a shriek voice she jumped with the speed of light, turned back to see one last time at the stationed train and walked briskly towards the dark field covered with wild grass to cross it as soon as possible as if she wanted to get rid of the past and to embrace the brighter future.

Lolita literally rolled down with laughter when Rosy made funny faces the trick she mastered recently to make her happy. Rosy came closer, put Lolita’s arms around her waist and kissed her firmly on her cheeks. Lolita was touched by her gesture and gently caressed her soft blonde hairs flowing down her neck. ” I was so cruel on my part to do such a thing to her. God would’ve never forgive me for the grave sin I was about to do. How dejected, dispirited I was at that point of time” She was talking to herself when she felt a warm touch on her shoulders. She turned to see and smiled instantly. ” Oh, I was just thinking about you Kiara…….I owe you everything I have today. Anything could’ve happened if I wouldn’t have met you on that fateful day.” Lolita rested her head on Kiara’s hands. Kiara pulled her closer and looked into her moist eyes.

” Remember what I told you before ! Things were destined to happen the way they did. I was just a facilitatorÂ sent by the God to make things happen for you. This is your life and it’s been waiting for you to discover it. I am glad that you understood that and bounced back.” Kiara said smilingly.

” Until I met you I was convinced that life was so hard and a constant struggle, in fact at one point of time I wanted to finish my existance but it was you who changed my outlook towards life. Now I want to shout to the universe……as Lolita said this, she climbed the stairs of an elevated platform used as a stage for various purposes. She spread her arms like a free and jubilant soul and shouted, ” Life is so easy and full of hope ! I love each moment of it. Life is good. All good things come to me ! “

Kiara was almost jumping with joy to give company to Lolita in her moment of extreme happiness. Rosy also joined them, a little confused, young girl to understand all this but she was elated to see her mother in bliss.

Kiara was thinking about Kabir who in his selfish, rather uncaring behaviour lost everything in life….. his true love, a soul mate and her trust forever. She still has not forgotten the dreadful day when Kabir received a phone call from a city hospital about Lolita’s unstable condition. She had met with an accident while traveling on the highway.

The receptionist asked in a requesting tone ” Sir as you know she is six months pregnant woman and we wanted to know your name and other information for the necessary documents. We may conduct a small surgery to save the child.”

Kabir was shocked, he asked inquisitively, “Where did you get my number from?

” The lady had your number and address saved in her cell phone as ‘Hubby dear’. I was told to inform you about the accident, she is still not out of danger as a matter of fact.”

Kabir lost his cool completely and he started scolding the receptionist on the phone. ” How the hell you jumped to this weird conclusion that I’m his husband. She was one crazy woman I knew sometime ago, I had no touch with him for last couple of months. I warn you not to call me next time for God’s sake if something happens to her.” You can always rely on her parents for the needful.” he slammed the phone and left the room.

Kiara was too stunned to react what she saw, quickly she checked the incoming calls list and fed the number in her cellphone. She got ready to leave for the hospital. She opened the garage in the meanwhile made a phone call to the Â hospital reception.

The lady confirmed the address to Kiara. She left immediately without wasting more time and drove fast only to stop her car right in the front of the lobby of the city hospital. She parked the car carefully, locked it and proceeded towards the reception.

Her heart was pounding with fear and anger. “How can Kabir be so self obsessed man? He could have helped Lolita just for the sake of humanity if not for love and good times they had together.” she was almost sweating when she reached the main area.

The receptionist was waiting for her, she straightway took her to ICU where Kiara met the doctor and took the detailed feedback on Lolita’s condition. Doctors were soon going to operate her, before that they wanted Kiara to sign the documents as her local guardian. Kiara submitted the caution money and did all the formalities regarding the surgery. She started praying for Lolita.

Kiara was standing next to Lolita’s bed. Lolita and child both were out of danger. Doctors had given permission to take them home. She gave a smile to Lolita and pressed her hand gently. Lolita said in a stammering voice, ” Why you helped me? You must go back to Kabir. He will never approve this idea of you being here with me.”

“I came all the way to thank you for showing me the light. Actually I was in dilemma after I read some of your letters written to Kabir, whether to continue with him. According to me once a cheater, always a cheater. He did it once with you, where is the guarantee he will not do with me. In the meantime this incident happened and what I saw of him, was enough to take the right decision for myself.” She said firmly.

“Pack your stuff. We are leaving the hospital right now. Don’t ask me where. Even I don’t know. One thing is sure we are going to make on our own. No self pity for sure.” Kiara grinned.

The train stopped with a slight jerk, it was good enough to bring Kiara back from the past memories. Kiara realized that she was Â  Â  still looking out of the window of the train. They both got down and reached home, basically a small cottage in the premises of the school.

The children were coming out of the school. It was the departure time. Children were showing their pleasure by waving goodbye while leaving for their homes. She felt contented that she could understand the power of Love. There is no greater power in the Universe than power of love. This school was their initiative to receive more love and satisfaction from the world. They both took it as an opportunity to contribute to the society.

It was a gift to this village from Lolita’s and Kiara’s side, a kind of reciprocative action for providing shelter, security and unconditional support during Lolita’s delivery. Elderly women showed tremendous faith and love. They neither got skeptical for Lolita’s martial status nor they were bothered to ask about Rosa’s father. For them nothing mattered more than happiness and comfort of both ladies.

Kiara was born with a silver spoon and some where she had this feeling that her wealth was the prime reason for Kabir to leave Lolita and started dating her. She wanted to get rid of it therefore she donated a big portion of her wealth in making of this school for the village children. It was a big boon for them.

Lolita was sipping her evening cuppa Â when Rosy came running to her “Do you think mom that there is more than enough to go around for everyone?” Rosy asked in a confused tone. ” My teacher told me to write a paragraph on this topic. I am not Â very clear, you have to help me with my assignment. ”

Lolita smiled and wondered, isn’t that the essence of life……more than enough love, joys, happiness then why people…..